Panel No.14: V For Vendetta

Panel No.14: V For Vendetta

As I sat down to blog this post on V For Vendetta – as trailed in the previous post – a friend sent me a link to a piece in today's Daily Telegraph newspaper* about the hacktivist/activist group Anonymous and their latest project, a cull of at least 100 social media accounts allegedly being used to recruit potential jihadists to fight for Islamic State.

(Click here to read the story in The Daily Telegraph)

The symbol of Anonymous is the "Guy Fawkes mask". Such masks were popularised by the comic book V For Vendetta… 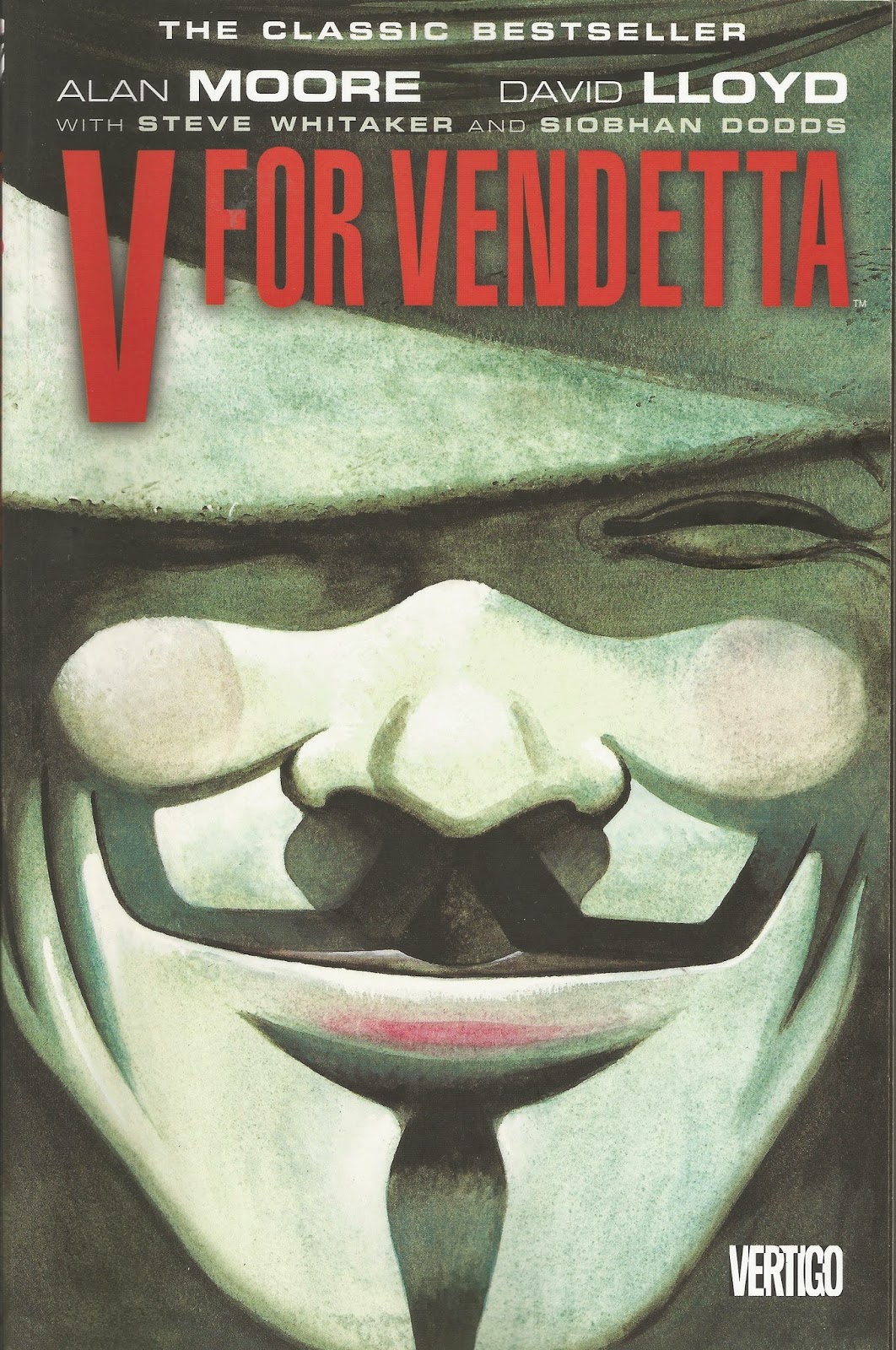 V For Vendetta is simply the most important comic book of our age.

It is with V For Vendetta, written by Alan Moore (in 1981, first published in '82), and a small band of other graphic novels (a term shunned by Moore himself) that the world of comics begins to elbow in to the same critical space as traditional literature. From this point on, comics/graphic novels would be discussed alongside Flaubert at dinner parties.

This last image would, I imagine, make Alan Moore – an occultist and an anarchist as well as a writer – want to throw up. At the very least.

Many of us knew it all along, o' course. But in the aftermath of the V comic – and From Hell , also by Moore – publishers would realise that there was a market for intelligent illustrated stories and such talents as Posy Simmonds – long a great newspaper cartoonist and children's illustrator – would be free to unleash her gifts on such projects as Gemma Bovary (1999) – based on Madame Bovary by the aforementioned Flaubert.

Moore did not, of course, invent the Fawkes mask – here's Buster comic from 1965… 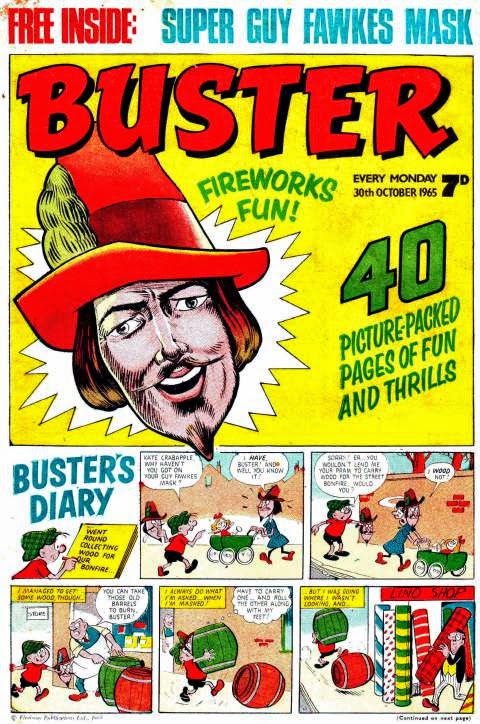 … giving a Guy Fawkes mask, already long popular with British children, as a free gift to readers for Bonfire Night (commemorating the bungled 1605 assassination by explosion of King James VI at the hands of plotters including the famous Fawkes).

But the film of V for Vendetta (2006), using David Lloyd's highly stylised version from the comic is widely credited with starting the contemporary phenomena of using the Fawkes mask in a protest and political agitation context.

So there's a big dollop of British radical history from the get-go. And the spirit of the Vincent Price movie Theatre of Blood provides some rather twisted "light relief". The paper stock and stylistic influence is pure D.C Thomson** and the shadow of Judge Dread looms large, too. For all that it was a hit in the US, it is very British comic.

Orwell is also in the mix, both in the words and the pictures. There's a grubby feel to David Lloyd's artwork that makes me think of the 1984 – the low quality goods, the cigarettes rolled so loosely that the tobacco falls out. The palette, too, is not only grim but its lack of breadth – putrid greens and yellows the hue of a week-old bruise providing scant respite from the suffocating shadows – underpin the privations of the story.

Our story is set in the aftermath of a nuclear war in the late 80s. Britain is under Fascist rule. V – a theatrically-costumed revolutionary anarchist in a Guy Fawkes mask – is wreaking revenge on the regime. Early in the story he saves 16-year-old Evey Hammond. Evey, from Shooters Hill in South East London, is an orphan – her father has been executed for his Socialist beliefs. Having saved Evey, V allows her to tag along as he embarks upon his next act of vengeance – blowing up the Old Bailey… 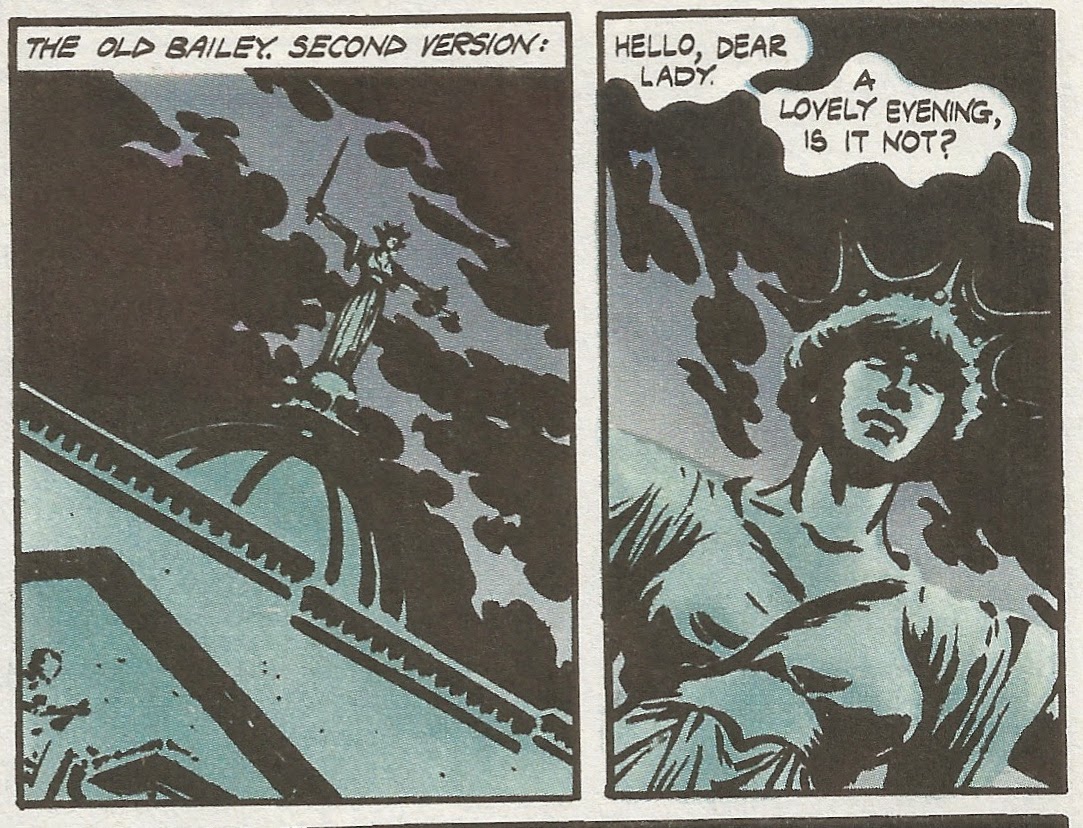 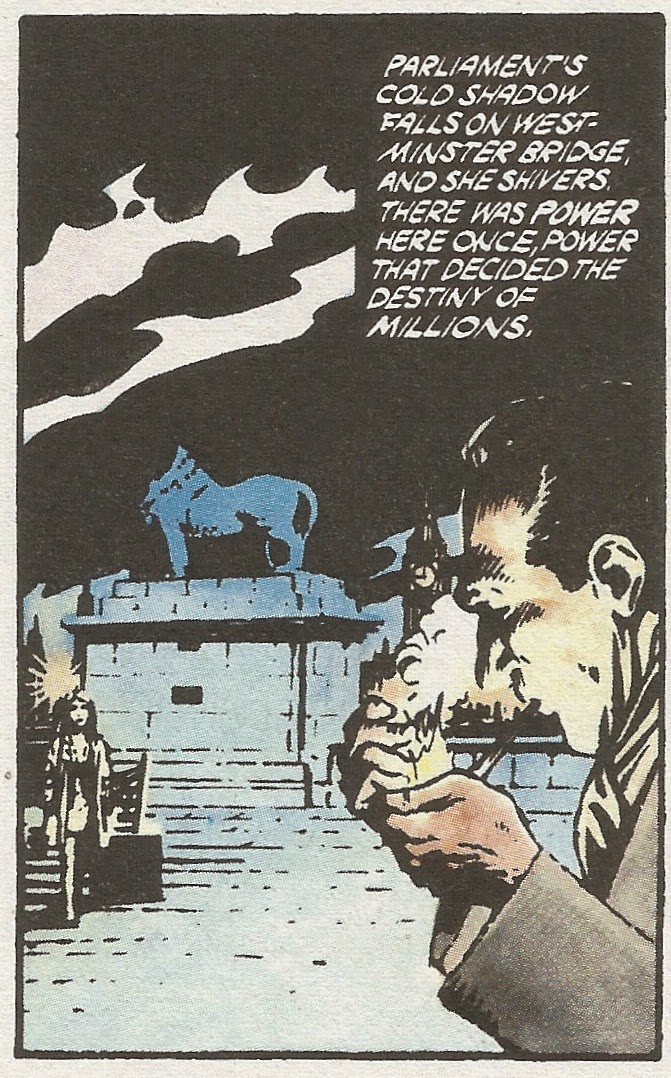 … but the Old Bailey scene is a signature moment in the tale.

We'll come back to Allan Moore again with his From Hell and The League of Extraordinary Gentlemen – doing our best to avoid the movie versions of those two books as Moore hated both film treatments every bit as much as he did the movie of V For Vendetta. (We'll ask my colleague, movie expert Richard IV to state their cases another day!)

You can buy V For Vendetta at the Vertigo website: www.vertigocomics.com