Panel No.36: The Cartoon Museum (Again!) and #BigBen (Again Again!)

Daily Constitutional editor Adam takes us on a Cartoon &amp; Comic Book Tour of London –  a metropolis-wide search for all things illustrated.

The tour so far has taken in everything from Gillray and Hogarth, to Scooby Doo and on to Deadpool and beyond! It also features the best in London comic book stores as well as galleries that showcase the best in the cartoonist's art.

In Panel 36 I'm swinging by TWO locations already visited on this blog "tour" so far – Big Ben and The Cartoon Museum for the excellent show Future Shock! 40 Years Of 2000AD in search of Dan Dare… 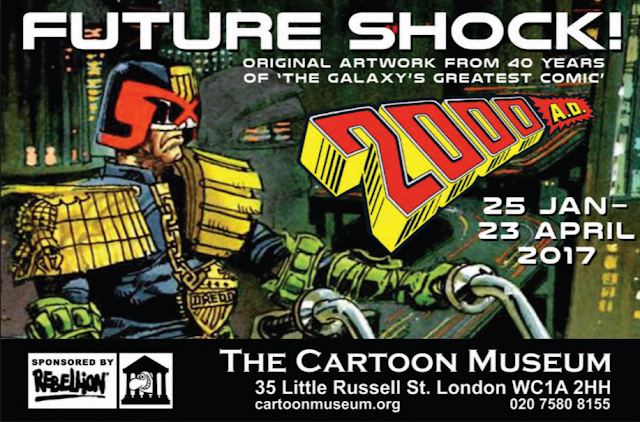 The world is in grave danger. Evil stalks us at every turn.

Worse yet… it's a real life situation. We're not in the pages of a comic book. There are no superheroes to swoop down and save the day.

The future of our very way of life is at stake.

To whom can we turn?

Well how about the combined might of Winston Churchill, the Communist Party of Great Britain, the National Union of Teachers and the Church of England? That lot could surely put even The Avengers to shame.

And what monstrous evil could unite such disparate forces as those listed above?

You know the ones… the REALLY GOOD ones.

Back in 1953 all of the above organisations, along with individual clergymen, magistrates and even representatives from the field of psychology and concerned parents up and down the country, joined forces to have so-called "horror comics" from America banned from British newsagent shelves – and thus from the clammy, thrill-starved hands of horrid little boys* everywhere.

(* No offence, readers. I blog this as a card-carrying Horrid Little Boy.)

One clergyman, the Reverend Marcus Morris, had fired an early salvo in the campaign with an article in the Daily Sketch newspaper in which he told of "a nearly 40 per cent increase [in crimes committed] among children aged 10."

"I blame much of this," he thundered, "on their 'comics'. As soon as a child becomes old enough to read, he enters a new world of horror and vice, where there are no apparent morals."

The Minister of Education, the impressive Scot Florence Horsbrugh (the first woman to hold a cabinet post in a Conservative administration), was of the opinion that the whole furore "was being overplayed". And that might have been an end to it, had the issue not ended up on the desk of the Prime Minister of the day…

Winston Churchill was elected Prime Minister in the general election of 1951. In February 1954, he asked personally to be appraised of "the sale of American type comics in this country and the social effects which they might be having".

The Home Office prepared a memo in which westerns and Tarzan comics are described as "harmless enough". But it also included prose so damning that every adjective pops with all the vim of the "Bam!" and "Pow!" flashes in a golden age Batman strip…

Stating that the comics are "Unlikely to be beneficial", it concludes: "the prevailing sense of values is shoddy and distorted."

Why was the Prime Minister involved in the first place? Why did such an issue get so high up the chain of command?

Legend has it that Churchill was advised by a close aide that the "unwholesome" comics in question were being published by Dundee-based firm D.C Thomson – a company that Churchill held in contempt because he believed that their editorials were instrumental in his losing the parliamentary seat of Dundee in 1922.

The bill introduced by Home Secretary Gwilym Lloyd George (son of David) came into law in 1955 as The Children and Young Person's (Harmful Publications) Bill. It set out to ban…

"...any book, magazine or other like work which is of a kind likely to fall into the hands of children or young persons and consists wholly or mainly of stories told in pictures (with or without the addition of written matter), being stories portraying—

(a) the commission of crimes; or
(b) acts of violence or cruelty; or
(c) incidents of a repulsive or horrible nature;
in such a way that the work as a whole would tend to corrupt a child or young person into whose hands it might fall."

The aforementioned Rev Morris was, however, absent from the populist campaign. He was busy having taken action of a different kind: the publication of a wholesome, British comic alternative.

In April 1950 Eagle was launched, with Dan Dare Pilot of the Future as its star… 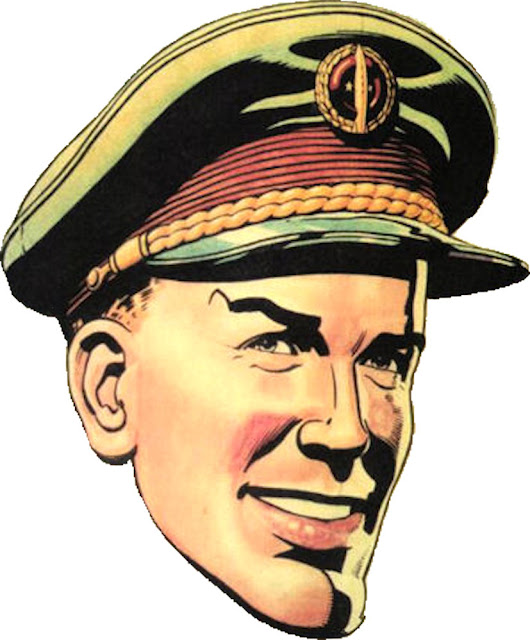 In an early draft, Dan Dare was not a pilot but a squadron padre – the chaplain or vicar attached to a military unit  – named Lex Christian. The surname is a clear indication of the direction that Morris and artist Frank Hampson were taking: respectable British values of decency, fairness and forgiveness would be our hero’s superpowers.

Unlike its American counterparts, The Eagle also featured longer reads and pieces on history and science. The Christian ethos of the title is perhaps most clearly seen in one of the other works for which Hampson is celebrated, The Road of Courage, a graphic retelling of the life of Jesus which first appeared as the back page strip in the Eagle in 1960… 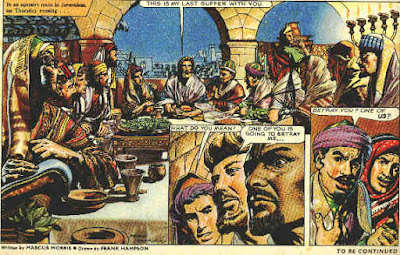 Legend has it that Lord Jellicoe, Leader of the House of Lords (and former First Lord of the Admiralty) read The Eagle in the Palace of Westminster library. Similarly Lord Mountbatten is said to have placed a subscription for his nephew Prince Charles and once found cause to ring the publisher to complain when an issue failed to arrive in the post.

My London Walks colleague Donald Rumbelow once told me that it was one of the great privileges of his schooldays to be dispatched by the head master to pick up the school's copy of the comic – not least because he would then have the thrill of being the first to peruse its pages.

My own introduction to Dan Dare came in 1977 when he was revived from his state of suspended animation to star in the newly launched comic 2000AD.

The Eagle had endured a miserable 1960s with budget cuts and the loss of the great Hampson and had been subsumed into rival Lion comic in 1969. But we hadn't yet heard the last of the great Dan Dare.

2000AD celebrated its 2000th issue in 2016 and looks forward to its 40th anniversary this month (February 2017). Back in '77, its editor was Pat Mills. Mills had worked on Battle comic and had created the legendary British classic Action comic, a publication noted for its sensational, violent thrills. Its publication created a panicked scandal unseen since the days of the 50s detailed above.

Mills took the decision to add Dan Dare to the mix of 2000AD with the idea being that Dan was still a much-loved comic hero. His presence, it was hoped, would help the new title establish itself in the market place. 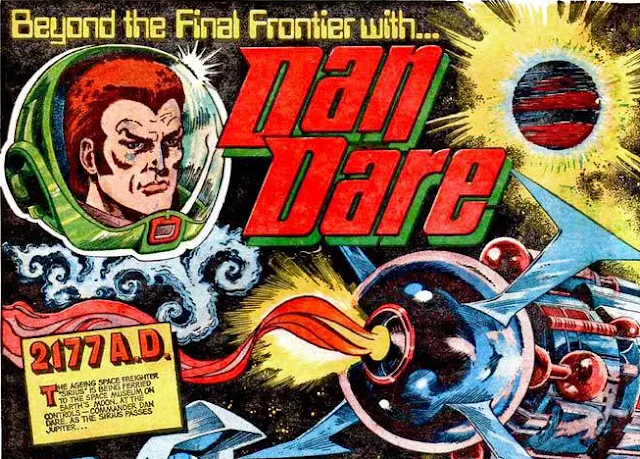 As you can see, by '77 he's less clean-cut, more of the period (suspended animation has worked wonders on his barnet and mutton-chops) – but the trademark squiggly eyebrows are still in place.

Last week I dropped in on Future Shock – the exhibition that celebrates 40 years of 2000AD at the great Cartoon Museum and was delighted to see some original artwork from Belardinelli featuring the London of 2077. Here's how the published version looks… 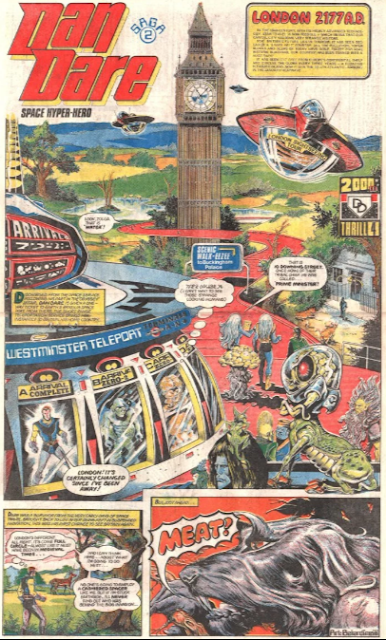 I'm particularly fond of the flying tour of London drone to the right of Big Ben. I wonder if I'll be leading those as a hologram 160 years from now? I like the "Scenic Walk Eezee" too!

… which pictured the Palace of Westminster in 2006. 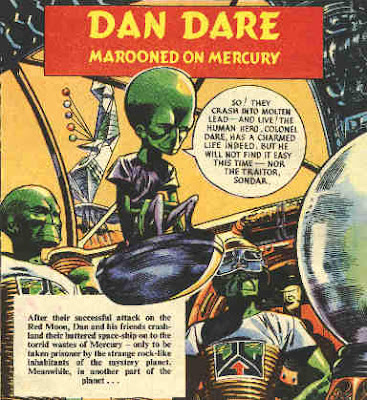 … and a right rotter he looks, too.

In the context of Big Ben and the Palace of Westminster, The Mekon holds a place dear in the hearts of cartoon and cartoonist fans in this country thanks to The Guardian's Steve Bell who used Hampson's famous alien as his jumping-off point for his take on former Leader of the Opposition and former Home Secretary William Hague… 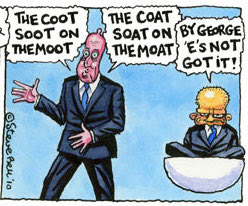 In fairness to Hague, unlike his 50s forerunner Lloyd George, never once in his tenure as Home Secretary did he seek to deprive us of our comics or cartoonists.

I have every confidence that I'll be back to Big Ben before long on this blog. I will certainly return to the topic of The Cartoon Museum, not least because they've got The Inking Woman, an exhibition of British women cartoonists from April 2017.

Frank Hampson's son runs an excellent website dedicated to the work of his father, with some excellent original boards available for sale. Visit the website here:

The Cartoon Museum's current show celebrates the unprecedented 40 year history of 2000AD. Future Shock! 40 Years of 200AD runs until 23rd April 2017. Admission is £7, £5 concession and £3 for students. Their website is here www.cartoonmuseum.org

The exhibition is curated by Steve Marchant (the Comic Creators Project curator) - I blogged about Steve in an earlier post explaining why I started this Cartoon &amp; Comic Book Tour Of London blog in the first place. Catch up with that post HERE. 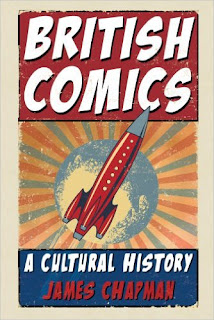 For further reading on the social history of British comics I can highly recommend British Comics – A Cultural History by James Chapman. Mr Chapman's book was the main source for the political background in this blog. You can buy the book here.

This being a Cartoon &amp; Comic Book Tour of London blog you will, of course, require a map. I think you'll now how to find Big Ben, but here's how to get to the Cartoon Museum…

I've collated all the previous 35 Panels in this Cartoon &amp; Comic Book Tour Of London blog in one place. I hope you enjoy them: cartoonandcomicbooklondon.blogspot.co.uk/

Next time on The Cartoon &amp; Comic Book Tour of London blog… Captain America and the Shard!