Having spent almost two years curating this blog, I am delighted to open this post with an announcement: The Cartoon &amp; Comic Book Tour Of London Blog is all set to become a real life London Walks tour! Pow! A Cartoon &amp; Comic Book Walking Tour of London – Superheroes &amp; Satire In The West End joins the London Walks repertoire on Saturday 15th September at 10:45am (meeting at Westminster tube exit 4).

To celebrate, here's a two-part post on Captain America in London!

Cap is back in Blighty in 1981 to fight Baron Blood once more, and the first London icon to be referenced is the infamous Jack the Ripper case. At the top of the story, The Slasher has claimed his third victim and the reference point is clear. Here’s Byrne's opening page… 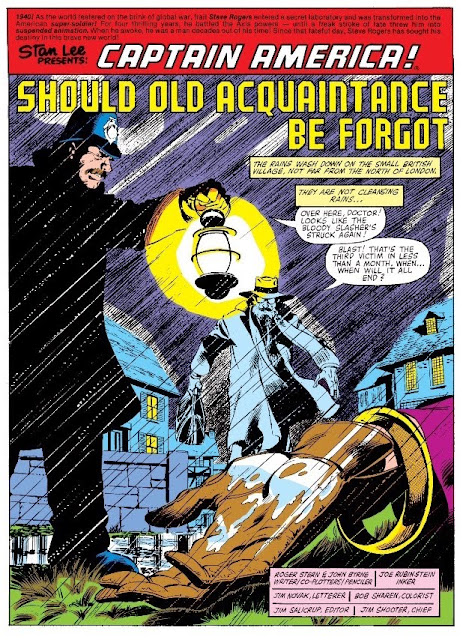 … and here’s the infamous Illustrated Police News from 1888… The Tower of London makes a cameo appearance and in a lovely little flourish, writer Stern pauses between punches to delivery a quick history lesson… 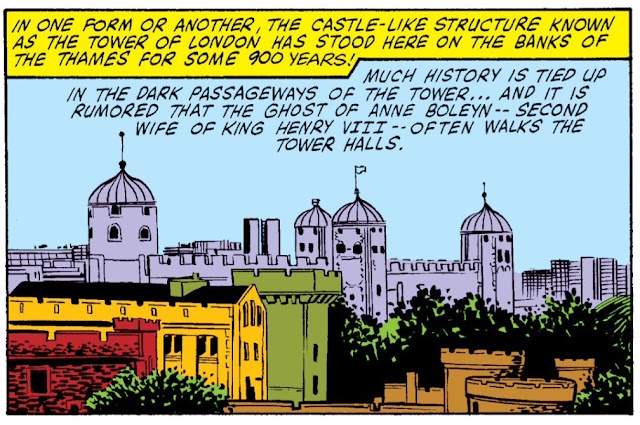 Four years later, Cap returns to the Big Smoke to assist Captain Britain in his darkest hour fighting the wicked Mordred The Mystic, illegitimate son of King Arthur and a thoroughly bad egg.

This being 1985, Concorde was the only way to fly… 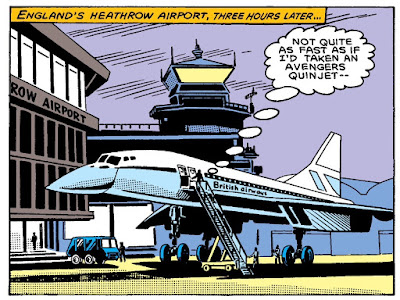 (How Steve Rogers, a skint graphic designer, could afford to fly Concorde we’ll never know. Maybe in the same way that Wonder Woman can afford a central London pad in my earlier post.)

In one of my favourite details, Cap jumps on the tube – literally – at Heathrow… 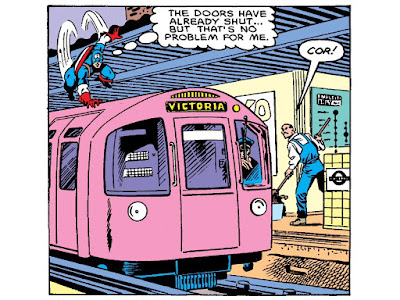 (Transport pedants - and my colleagues Fiona &amp; Harry – will notice that the train is going to Victoria. The tube for Heathrow airport at this point in time was Hatton Cross and trains did not go to Victoria from there.)

Cap gets inveigled into a fight with Mordred and in an epic, aerial punch-up (ah, they don’t make ‘em like this anymore) blows are traded over Tower Bridge, St Paul’s and Big Ben. But the location I’m choosing from Captain America 305, and making its debut in The Cartoon &amp; Comic Book Tour Of London Blog is The Post Office Tower… 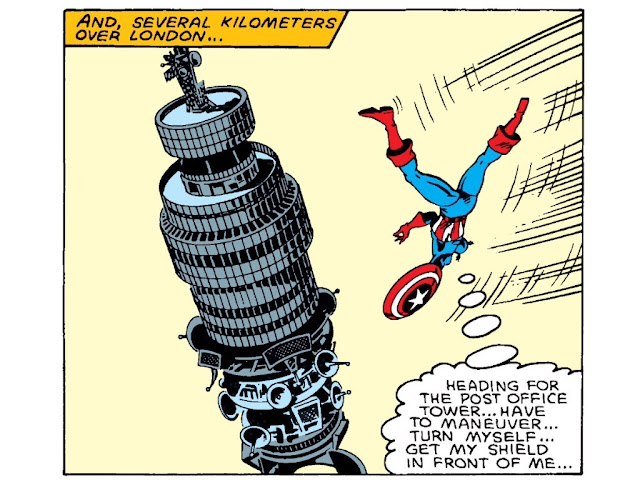 … where Cap finds respite from the fight and uses one of the satellite dishes as a decoy shield to foil the wicked Mordred.

Cap’s most recent adventures have been turbulent indeed. And I, for one, have fallen in love with the character all over again.

In 2014 Steve Rogers lost his ability to remain youthful and the mantle of Captain America was taken by Sam Wilson who, as The Falcon was the first African American superhero in mainstream comics. The inaugural adventure of the first black Captain America opened with Wilson defending Mexican immigrants at the U.S border.

It is one of this reader's most exhilarating comic book experiences.

The AltRight, inevitably, blew up. “Captain America Has A New Enemy,” screamed a Breitbart headline, “Conservatives Concerned About Illegal Immigration.”

Then in 2016, with Steve Rogers back in the mask (and young again! Hey, this is comic books, anything can happen!) it is revealed that Captain America has been a sleeper agent of Hydra all along (!!!!!). Hydra, for the uninitiated, is a terrorist organization with deep ties to the Nazis – hence my earlier use of five exclamation marks!!!!! 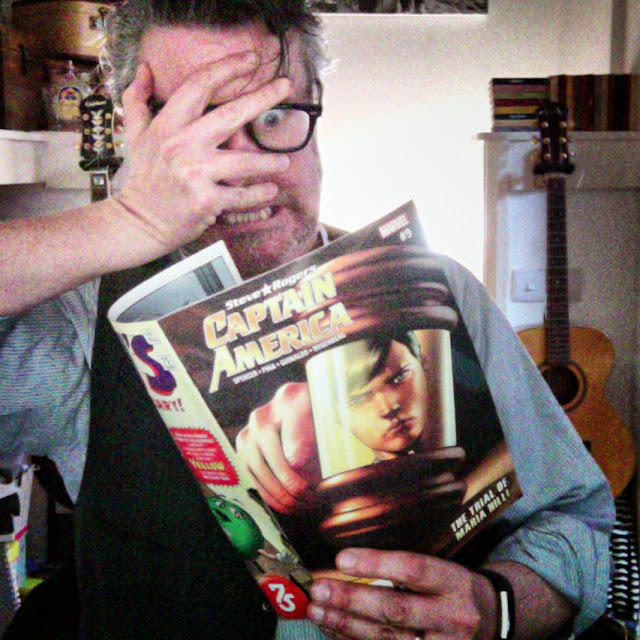 It was the plot twist that, in that wonderfully daft, catastrophising millennial phrase, broke the internet. Everyone had something to say. If there was any remaining doubt about Cap’s status as a political figure, it was surely all gone

Captain America has been a symbol of heroism for years, that all appears to be a lie https://t.co/oi9RfUUoyc pic.twitter.com/0EnA9DwxXO
— CNN (@CNN) May 26, 2016

Writer Jessica Plummer, with clear-headed anger and a keen sense of heritage, wrote, “I am angry, because Steve Rogers’s Jewish creators literally fought in a war against the organization Marvel has made him a part of to grab headlines.”

Me? I loved the whole thing. The furore was fascinating as it unfolded, with debates on anti-semitism and racism ignited by what many would still deem to be a mere comic book. The real life political context, in which Trump made his victorious run for the White House was something that Spencer and the commissioners at Marvel could not possibly have planned.

More than anything, though, I loved the bravura storytelling. Enjoy would be completely the wrong word. It was tough going sometimes, but at the end of every issue I was knocked out by the sheer audacity of it all.

And a London location? He turns up at The Shard in issue #9. Perhaps this is symbolic of a new era for London is comic books – no sign of Big Ben, here. Is this because London is finally acquiring a modicum of world class, signature modern architecture amid all the designed-by-Minecraft modernity? I do hope so. 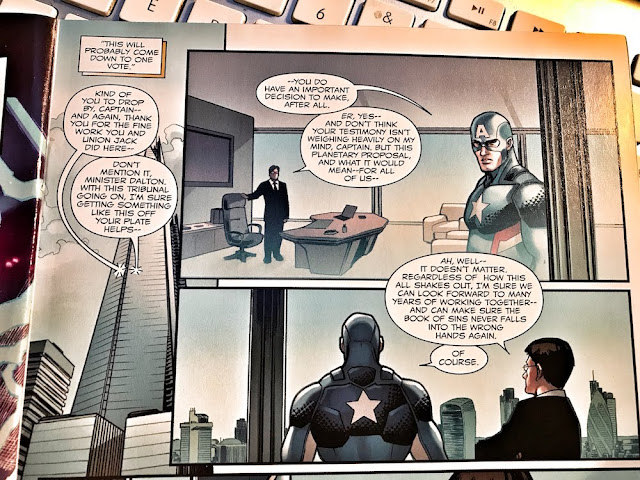 Too right wing for some. Too wet-liberal for others. Too imperialist to even read for others yet. So… how DO you solve a problem like Captain America? Well, you don’t. Because he’s ALL problem. ALL the time. Which makes him one of the most fascinating characters in the canon.

Cap also turns up in 1602 an ingenious short series written by Neil Gaiman which transposes the beloved characters of the Marvel Universe to Jacobean London. 1602 will feature in a future post of The Cartoon &amp; Comic Book Tour of London.