THIS POST WAS FIRST BLOGGED ON THE 7TH JANUARY 2015…

Following the horrific murders in Paris earlier today, I present a change to my scheduled post.

As part of my Cartoon & Comic Book Tour of London I had planned to discuss the ongoing World War Two comic book series Über – a post that I will now hold over until another day.

In its place I will continue my tour by paying tribute to a magazine that stands alone in its field, our last remaining satirical news magazine Private Eye.

My thoughts tonight are with the families and friends of those who lost their lives at the office of Charlie Hebdo magazine in Paris.

Private Eye. Long may it reign. I love its every scabrous, satirical and sacrilegious dot and comma.

Private Eye, I explained, is a magazine with cartoons that pokes fun at people.

Me: Yes, very much so. But with lots of words, too. Very funny words.

"What people does it poke fun at?"

All people. Prime Ministers, policeman and priests. Celebrities. Journalists. Everyone and anyone.

"Do the people like it when it pokes fun at them?"

Do you know what? Yes they do…

As a journalist I once featured in Private Eye. And I remember the moment vividly.

It was lunchtime. I was sitting at my desk in South Quay over in the Docklands when my mobile phone started to buzz and ping, while a moment later the landline chirruped into life. I answered the landline.

The voice at the other end sang with excitement: "You're in Private Eye!"

I had written a theatre review for The Independent the prose of which had erred on the florid side. On the fanciful side. Pretentious. It may have alluded to "millennial angst". Dearie me.

And Private Eye was down on me like a ton o' bricks.

Fair play. I had it coming.

Me: Anyone in this country. You can buy it anywhere in the UK.

"So the whole country was laughing at you for writing silly things?"

Well, sticks and stones may break my bones…

"But words will never hurt me."

Here's a the front cover of the current edition featuring the infant Jesus, the Blessed Virgin, St Joseph, sundry angels and eight daft balloons having a right good giggle at the birth of Christ… 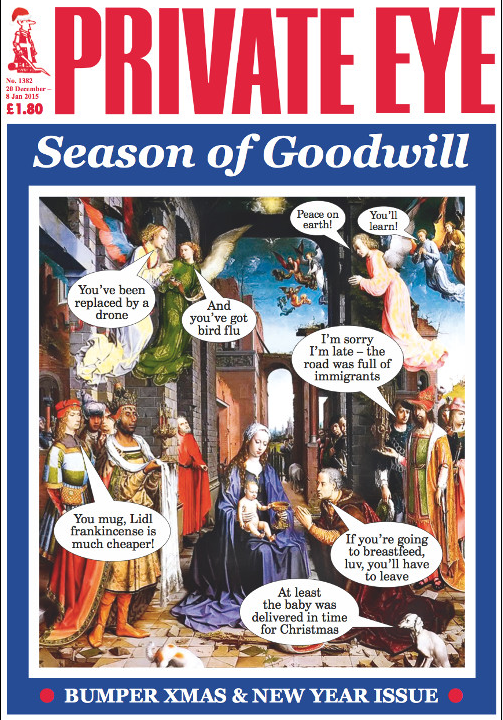 Inside, the magazine is sprinkled with similarly daft cartoons featuring the three wise men, the archangel Gabriel and God.

The new issue goes on sale tomorrow. This journalist is thankful that he'll be around to buy it. And buy it I certainly will.

It has long been home to the greatest of British cartoonists. Bill Tidy, Michael Heath and Nick Newman among them.

Its offices can be found in that iconoclasts' paradise, Soho. I've always loved that: based in Soho and not in Fleet Street. It's right and proper that Private Eye journos and cartoonists should not be seen with their snouts in the same trough as the hacks it so often satirised in the old Street of (Dr)ink. Don't get me wrong: I'm sure they have their snouts in other troughs with different reprobates elsewhere. Good for them. Good satire is thirsty work.

"I am appalled and shocked by this horrific attack - a murderous attack on free speech in the heart of Europe.

I offer my condolences to the families and friends of those killed - the cartoonists, journalists and those who were trying to protect them.

They paid a very high price for exercising their comic liberty.